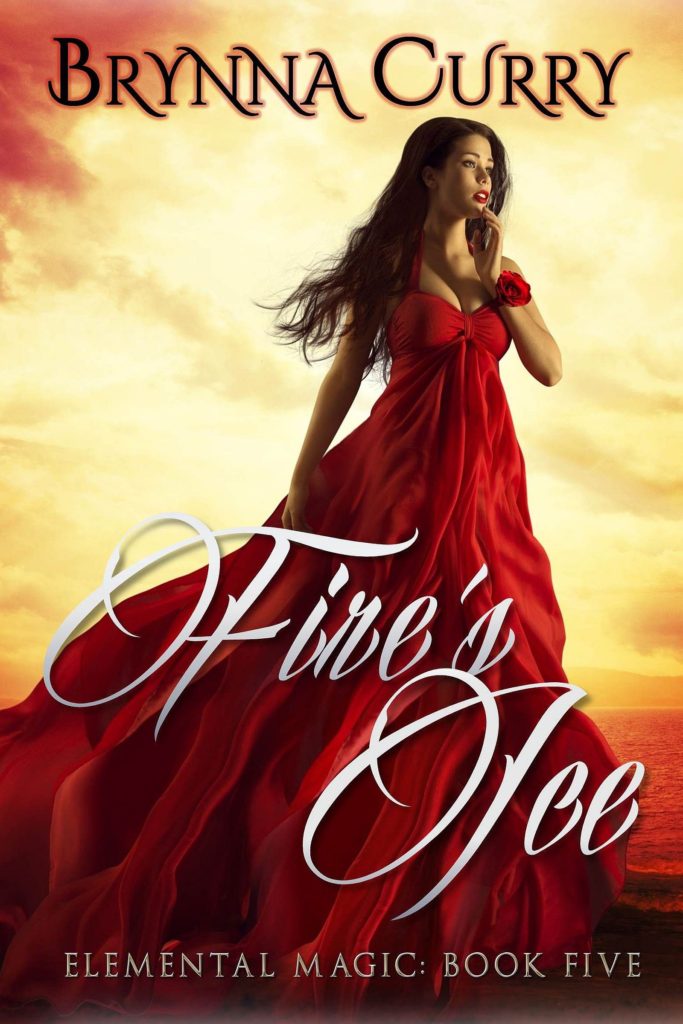 Born the son of a Scottish laird a thousand years ago, but now trapped by his cousin’s spell, Devin McLoch has seen countless battles and death. The erstwhile thief has turned away from darker pursuits to lead a life of peace, protecting those he loves and considers part of his clan. However, there is one woman he can never forget, who must be given a chance to change, to accept her heart and his.

Arianne Farrell is just as dangerous and intoxicating as her power. Imprisoned in an ancient stone dance more than a thousand years ago, her only chance at freedom from the spell is through love–a love she denied. When Devin asks for her aid to save another from imminent death, she realizes there is more at stake than just her freedom or her heart.

WARNING: Two stubborn sexy wizards using magic with no bounds, scorching love
scenes, and happy ever after. Ever play with fire?

5 Hearts “Fire’s Ice is a sweet and sensual tale of love and overcoming obstacles, mostly pride. Both Ari and Devin allowed pride to stear them into rough times and forced them to lose things precious to themselves. But when they begin to see things more clearly, they realize that love is important, not power or magic…only love.” –Melissa – Sizzling Hot Book Reviews http://www.sizzlinghotbooks.net/2012/06/fires-ice-by-brynna-curry.html?zx=138211dd4142b321

Gotta Read/ 5 stars “By far my favorite…Ms. Curry has continued to be true to the series and to write each part as a stand alone or if you read the whole series, they weave together seamlessly.  I have enjoyed being able to delve into their lives and feel their pain, love and happiness.” Jennifer – You Gotta Read Reviews   http://yougottaread.com/review-fires-ice-by-brynna-curry/

4 Tombstones “Fire’s Ice was truly about the magic and power of love as Ari came to terms with her pride and arrogance. Devin’s strength and loyalty for him family is admirable… As always, a story by Brynna Curry was an absolute delight to read.” –Mary – Bitten by Books http://www.bittenbybooks.com/51375/fires-ice-by-brynna-curry/

This interview was originally posted on the Lyrical Press blog. I’ve left it intact as posted.

Today, I’ve asked two of my favorite characters to help me take over the Lyrical blog, Devin McLoch and Arianne Farrell of Fire’s Ice. Their story started centuries ago, but it is that time, both apart and together, that forged them into who they are today.  Thanks for helping out guys. Why don’t you tell readers a little about yourselves? Ari?

Arianne: Hi, Brynna. I’ll stay as long as I can to answer questions. The boys could wake up from their nap any time.*snuggles into Devin’s side* I was born in a small village on the coast of Ireland in 985 AD. My twin Briella and I were raised by the village elders after our mother died in childbirth. Brie was destined to take her place as the wise-woman, but her power was corrupted by her love for a demon. After a lot of magic gone wrong and many years of imprisonment, Devin freed me from the stone dance near Liv’s cottage. Now we live in a castle in Scotland with our triplets and one very human cat.

Devin: As the firstborn heir of Laird Duncan McLoch, I spent much of my youth learning the skills needed to govern our clan in the event of his death. I practiced my magic in secret. It was that magic which ultimately allowed me to save our clan. Unfortunately, at the same time I was casting the barrier around Glen McLoch in Scotland, my cousin Daemon was casting his own spell in Ireland.

The intermixing magics were too much for any one of us to contain. Daemon and Briella were destroyed, turned into the elements they called to for power. Ari had fallen under my protection with his spell, so the magic that barred me from my home kept Ari locked in the stone dance. Fast forward a thousand years, I was finally able to keep my word and free her from her prison.

Brynna:  Devin, when did you first use magic and realize power would always be a part of your existence?

Devin: I was seven when the visions started. Shadowy images; whispered sounds.Simple like hearing someone’s words before they actually said them or knowing a trencher(that’s a plate) was about to be knocked off the table to the floor. It unnerved my father. I was his heir, but in his world, all things magic were evil incarnate including me. Father blamed the sliver of faerie blood my mother possessed for my gifts.

At twelve, my phoenix fire began to emerge; my father could no longer ignore my powers existed. Mother went against his wishes and summoned her cousin Daemon to teach me control before I killed someone or myself with the power. Lucky for me, I was a quick study. By the time I turned sixteen I had complete control, at twenty I had mastered all the other elements as well.

Brynna:  You’ve never mentioned your father and now I see why.  What is the hardest thing about living a thousand years?

Devin:  Time.Just finding a way to spend the endless time. If I had stopped to think about the infinity of what was ahead, it would have driven me mad. I turned twenty-five a week before the MacGavins attacked. I had spent my life preparing to lead our clan, to defend and protect those in my charge and I failed. I grieved the loss of my family until I thought the pain would kill me, but it didn’t. I became a swordsman for hire, craved danger and death. No matter what I tried, nothing could end my cursed existence. I roamed the world and longed for Scotland.

Brynna: It sounds like you’ve both been through a lot to find happiness. Arianne, why is your magic so feared? What kind of power do you have?

Arianne:  My power is detractive magic. I have also been called a conduit. Like a magnet, I can draw another witch or demon’s power into my body and either neutralize it or use it as my own. I can also conjure and heal. It may sound like a wonderful talent, but pulling on the wrong power and not being able to control it can have disastrous results. The elders saw my dark power as evil and forbade me to do more than gentle healing with herbs and tonics. Fortunately, I have learned to channel my powers in reverse, meaning I can give portions of my abilities, temporarily to another person.

Devin: Your magic is beautiful, my love. Nothing about you could ever be evil. *kisses Ari’s hand*

Brynna: Aww. You’re such a sweetie, Dev, but let’s get back to the questions. It’s getting a little awkward in here. What made you decide to change your destructive course?

Devin:  I found my way to Ireland, to the stone dance by the sea on the day of Daemon’s daughter’s death. The village was quiet, in mourning over their beloved healer Sorca. I realized something then as I stood in the shadows while her children, those of her blood and those of her heart, buried their mother. My clan wasn’t gone. Sorca’s family was mine as well. I was needed. I had a duty to protect those she left behind.

Brynna: When did you realize the Ari in the bubble might not be the Ari people thought she was?

Devin:  I heard a soft sobbing on the wind after Sorca’s burial. I followed the sound hoping to offer comfort and found myself outside the dance. I couldn’t see her, but I could feel Arianne’s grief and love for her niece. I knew then. I understood what it was like to grieve alone. I had to help her, though at the time I resented having Ari magically betrothed to me. I prefer to do the choosing.  I tried to push through the barrier of magic surrounding the stones but it was no use. All of our powers, including hers, held Ari bound.

Brynna: And Ari, when did you realize Devin was on your side?

Ari: The day of Sorca’s burial was a turning point for both of us.  I thought I had known pain, despair, loss, but any heartache I had experienced paled against Sorca’s death. In every way that counted, she was my child. I loved her so much. I watched her fall in love, raise her children, grow old. I knew I would outlive her because of the spell, but the reality of that day crushed me. (turns away) I’m sorry. I just need a moment.

Ari: No. I’m fine. It is difficult to reflect, but necessary. I listened to the pipes and mournful sounds of her children until I thought my heart would burst. I needed comfort, just to have someone with me. And then Devin was there. I don’t know how long he stayed, but he tried so hard to get through the barrier. He sat on the grass and leaned against one of the stones. Inside the circle, I rested my back against the same stone. Outside the circle, he remained hidden from me, but I felt his power whisper around me, hold me. A ghost of air and light and warmth. I knew then he would do everything in his power to free me and I would do all I could to help him.

Brynna:  Even then you had a special connection. So in a way, you saved him.

Dev: We saved each other. *smiles*

Brynna:  What is the hardest thing about living a thousand years?
Ari:  Loneliness. Without my looking glass, I would have gone crazy. At least with it, I had some connection to the outside world. Occasionally, I could even see Devin, but only when he sought me with the gems.

Brynna: What about you, Dev? What do you miss most about your life a thousand years ago (outside of your family), and what do you like best about life today?

Devin: The simplicity of everyday life. The world moves so fast now we don’t take time to enjoy it. Still, technology fascinates me.

Brynna: Do you always have control over your powers?

Devin:  I’d like to say yes, but the truth is when I am worried, sick or upset I have to calm my mind for the magic to obey me.

Ari:  Mostly. Sometimes I take on too much and the power overwhelms me, but I can’t stand to see someone hurting and not give everything to help them.

Brynna: Dev, if we asked Ari to describe you in three words, what would she say?

Devin:  Hmm. That’s a good question. Arrogant, powerful and fiercely protective. She’d be right. There is nothing I wouldn’t do, no lengths I wouldn’t go to protect those I love. My family is the most important aspect of my life.

Brynna:  What one thing about Ari fascinates you the most?

Dev:  Ari is just an amazing person. It isn’t any one thing but countless little things she does. The way she cares for others, gives of herself even when it would be wise to back away. She’s beautiful of course, fun and sexy, but it’s her loving nature that attracts me the most.

Brynna: Thanks for taking the time to visit with us. I know it can’t be easy for either of you to talk about your past.

Ari: Our past makes us who we are. Denying what was won’t change the present.

Dev: Very true, love. The boys are still sleeping, so we have time for a few more questions. How about some from the readers?

Brynna: Wonderful! Alright y’all. The floor is all yours. We’d love to answer your questions.