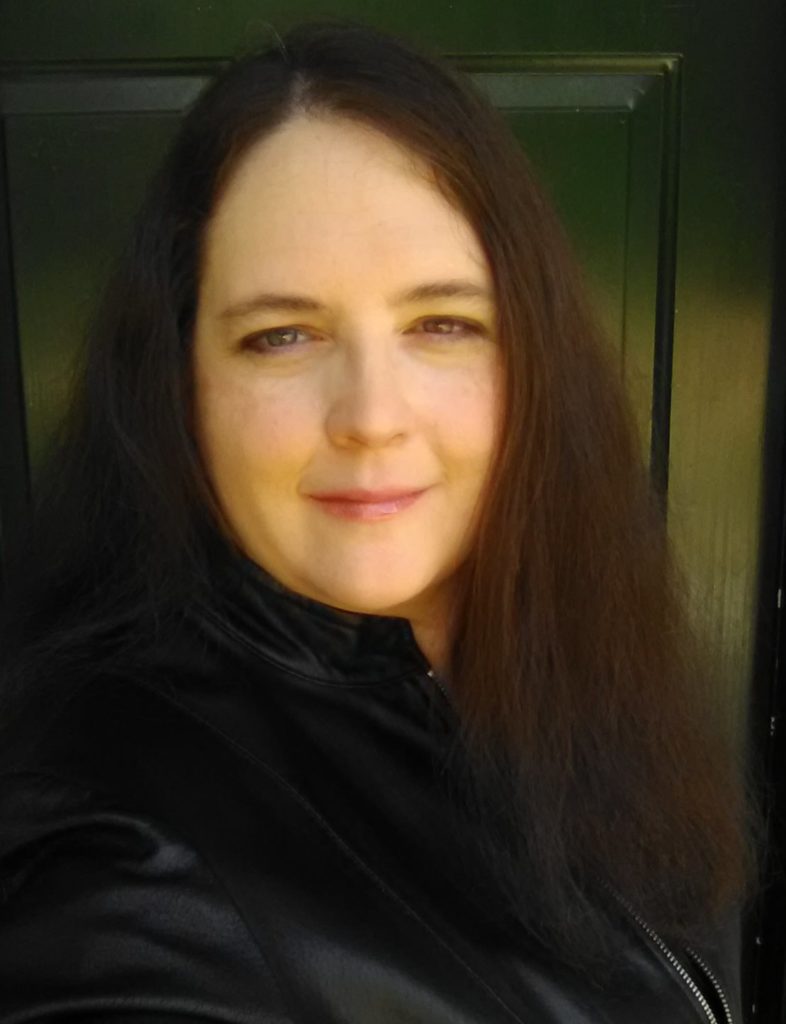 Bethany Cagle, who writes as Brynna Curry, was born south of the Mason-Dixon Line in a small Alabama town. Growing up, books fueled her dreams and imagination, ultimately became her sanctuary during the hardest times in her life. After living all over the southern states, she finally landed back in north Alabama where she met her husband, Jackie. She spent a wonderful twenty-two years with her hero, raising their three children.

Now widowed, she spends her free time writing. Her furry minions, Jace, Styxx and Asheron, are always willing to keep her company while she works. She insists love is the truest magic and with it every day is an adventure.

Unofficial Bio (aka My Life Story - consider yourself forewarned):

I was born in Russellville, Alabama, but I grew up all over the south, moving to Tennesee, Mississippi and back to Alabama again. Out of the different places I lived as a child, I guess Waynesboro, Tennesee was my favorite. I loved making up stories as a kid and telling them to anyone who would listen, including a menagerie of cats, dogs, birds and hamsters.  Growing up, books were my escape, my sanctuary. I read everything I could get my hands on, whether or not it was age appropriate, and the spookier the better. I was the shy type, the book worm all the cheerleaders torment during school. (What was the point of that, girls, really?) I was also the “band director’s daughter” which is akin to queen geek- so not an honor let me tell you. We also grew up dirt poor. The ‘mean girls’ at school put me through h*ll for it, but I’ve forgiven them…well, mostly.  My childhood home was one of domestic violence. My parents fought more often than not. I guess there were a lot of stupid reasons why they acted that way, but to a child it was just scary and wrong. Two particularly vivid memories I have of that time are of mother hitting dad repeatedly with an iron skillet, another is of him leaning her over the sink with a butcher knife to her throat. No one ever intervened. There were no cops showing up at our house. No family. It was like this every, single, day. Keep in mind my father was a teacher. Now that’s a scary thought.

Eventually, my parents divorced and at thirteen I moved back to Haleyville to finish high school. I loved living close to my Aunt Brenda. She was a major influence in my life and my cheerleader for everything I scribbled. At sixteen, I met my high school sweetheart, Jackie. He was a football player with a black belt in karate from a neighboring school.  He was the classic bad boy.  At seventeen, a month before my high school graduation, I became a teenage mom when our son L.J. was born. I put my writing dreams on hold, but I still wrote every day.

Through sheer grit and a lot of help from his family, I got my high school diploma and enrolled in community college in the Cosmetology program. I would have rather taken journalism classes or something writing related, but it was more important to provide for my son and help my fiance finish school so I chose a quick program. I also went to work full time as an ice cream girl in a local restaurant (In case you wonder what that is, I made all the shakes and frozen concoctions like they had in the old soda shops in the fifties.)

I was never a girly-girl. I hated Cosmetology and the chemicals from the beauty products triggered the awful migraine headaches I’d had since childhood. Between a full time job, the baby, being sick all the time and full time college classes that I hated, I buckled under the pressure, dropped out and entered the school of LIFE, opting to work full time and be with my baby at night.  Jackie kept working towards his diploma and taught karate classes at night. With his parents help, we were surviving.

In ’95 (on my 19th birthday) our oldest daughter Anna was born.  Jackie graduated and went to work as a welder. My dream of writing was lost in a shuffle of work, bottles and diapers.  I kept making up stories, but they remained in my head and on random pieces of scratch paper.  Then barely a year later, I lost my aunt Brenda in a car accident. To say it destroyed me is putting it lightly. I lost the mother of my heart and even now I can’t think of her without tears in my eyes. I froze. My characters went silent. I stopped writing for a very long time.

In 1998, we welcomed another daughter, Kayla, my little kkcat. Then in 2002, Jackie caught a violent strain of the flu which didn’t respond to fast working antibiotics. While in the hospital, he was diagnosed with type two Diabetes.  For three weeks, I watched over him day and night, giving medicine and trying to give him enough fluids to stay hydrated.  He doesn’t remember that time; he was unconscious for most of it.  I could not know or begin to fathom that this would be the beginning of a long, tragic, journey.

To keep from going crazy with worry, I reached out for my security blanket and started writing again and researching his illness. Since he had never been sick before, I hoped it might go away, but of course it didn’t. Diabetes sucks. He got well, went back to work. In ’07, a blood sugar spike caused Jackie to have an accident that almost killed him and left him disabled. We managed, re-adjusted our life to accommodate this new situation. I became the breadwinner, working full-time while he stayed home with the kids. I wrote at night after everyone was asleep and in ’09 the work paid off when I signed my first contract with Lyrical Press.

Over the next few years, he developed gastroparesis and had to hospitalized once or twice a month for a week or more each time. At one point I counted 14 ICU stays in a single year. That’s just ICU admits, not the times he went ‘to the floor’ as the nurses say. And of course, the kids and I were at the hospital with him. It became a pattern for us, get the kids ready for school, go to work, pick up the kids, go to the hospital, stay til ten, drive for an hour, go to bed and do it all over again. Any writing I did during that time was in the ICU waiting room. I practically wrote Wait for the Wind in ICU, by his bedside.

Then Life threw us yet another curveball just when we were finally holding our own. After a long strained relationship with my maternal family, the link with them was severed. If you know what an emotional vampire is, then maybe you can understand. I was in the middle of a deadline and writing Sea’s Sorceress when I got a call from my son’s school to tell me he had been arrested. My world stopped again. No fear exists in this world like the fear a mother has for her child.  My mother, sister and sixteen-year-old niece filed false charges against my then sixteen-year-old son, charges that could have meant him spending his entire life in prison. That was the end of any kinship I could have with them. No one messes with my babies. NO ONE. So I brought down the thunder and served up the lightning.

After two years of worrying, praying, the courtroom drama ended with an acquittal because of zero evidence to support the charges and quite a bit of evidence to refute them. The records are sealed, so I can’t and won’t discuss the details, but lets just say if your child is being put through the hell of a legal battle, I know a darn good Alabama lawyer. My little family came out on the side of justice. Scarred but still intact. I lost every member of my blood kin family over their drama. The loss of contact with my youngest niece Savannah is another I can’t get over.  If you read Fire’s Ice, you’ll pick up on the fact Ari’s feelings towards her niece are very much mimics of my own grief.

Of all the hellish times I’ve encountered throughout my life, nothing can compare to the misery of losing my love. My Jackie was taken from me on November 18th, 2014 due to a complication with his Diabetes. Unless you’ve experienced the same, there is simply no way to describe the soul-wrenching torment of losing the one person who is closest to you. We finished growing up together, made a family, a home, a life that sadly many never experience. We were given a gift of love so strong that nothing could truly keep us apart. His beautiful soul is with Jesus, but his love is in my heart, the snap shots of memories are in my mind. I see his sweet eyes when our daughters look at me, hear his voice in our son’s and I know he isn’t truly gone, just hidden behind a veil I can’t see.

On a less depressing note, I freely admit to being a Harry Potter nerd. I am so not a fan of Twilight, but I did read the books because Kayla was reading them.  If given the choice of a grown-up movie or TV show and anime, I’ll choose the anime every time. There is plenty of real in the world; I want the fantasy. I make it a point to be involved in what my kids like and thanks to L.J. I can hold my own in both Yu-Gi-Oh! and Pokemon. (It’s probably not a surprise that my favorite cards are Dark Magician and Dark Magician Girl.) What a wonderful imagination the creators of those games must have. I’ve only managed to beat him playing video games one time. It was Dragonball Z and I had to fight as Vegeta to win. (Vegeta is my favorite character btw.) LOL.

When I’m not working the day job or taking care of my family, I write steamy paranormal romance and suspense.  Sometimes my writing can be violent and dark. But, I grew up in darkness and it’s only natural to write what you know. I give my characters the reins of every story and that doesn’t always work well, but as long as we get to the right destination I’m okay with that. It’s a process. In the paraphrased words of Sailor Jupiter, “if just one person enjoys your book, isn’t that reason to write more.” Why yes it is, even if it is only one, and I plan to do just that. My story worlds are still my sanctuary and I enjoy sharing them with you.

Nothing without effort. (and sometimes it takes a lot of patience too.)

Social Media Links / Where to Purchase