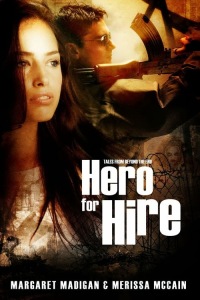 6
Things About Hero For Hire
1.      Hero for hire is both Margaret and
Merissa’s first published work. We wrote it on a whim, having seen a call for
submissions. It was also our first attempt at writing together and it was a
huge amount of fun to do.
2.      The call for submissions was for
reimagined fairy tales set in a post apocalyptic world. We loved the idea—it
sounded like so much fun to write. We settled on Snow White because there are
so many themes to play with in that story.
3.      Given the subject matter, we wanted
the story to be really fun and a bit campy. Even though the story framework
from Snow White was there, we had a lot of room to maneuver within the
framework and the characters took on a life of their own.
4.      While we were writing Hero For Hire, I
(Merissa) was living in an RV as my family and I toured the United States on an
extended but not very well thought through road trip. 14 states, and a stop at
Disney World later, Hero For Hire was finished.
5.      Margaret conceived and wrote Rafe’s
character, I conceived and wrote Gwyn’s character. But even though we each
wrote the point of view chapters for the two main characters, we edited each
other’s work as much as out own. There are passages in the story, where we can’t
tell who wrote which bit, because we edited it seamlessly.
6.      Hero for Hire is first in a line of
“Tales from Beyond the End” novellas Margaret and I are writing.  We hope
you love Hero for Hire and check out the others as they are released.

Blurb:
One day her prince would come…disguised as a
zombie-killer.
Having been
disgraced and tossed out by her own scientific community, Gwyn is convinced she
can develop a cure for a SuperVirus that has turned the Infected into zombies.
By pure luck and determination, she has survived on her own for years, but
while out scavenging, a clash with the local zombies leaves her potentially
infected. Now, running out of time, she needs help and takes a chance on a hero
for hire.

Rafe loves the
apocalypse. Since the world went to hell, everything’s come up roses for him.
Having procured a mansion in the Hollywood hills, adopted a slew of homeless
boys and one cantankerous but useful Doc, Mr. Charming is benefiting from the
nasty zombie infestation. His job? Killing the bastards, which he considers fun
anyway.

Gwyn Snow needs
Rafe Charming to help retrieve her research from the Paragon Pharmaceuticals
lab, also known as Zombie Central. Believing she can yet save the world, Gwyn
makes Rafe question whatís right and what’s worth the fight.

CONTENT
WARNING: Prince Charming, Snow White and the Seven Dwarves as you’ve never seen
them before.
A Lyrical Press
Fantasy Romance | Once Upon

Buy Links
Amazon: http://www.amazon.com/Hero-Hire-Tales-Beyond-ebook/dp/B00FF7IFFK/
Barnes and Noble:
(Not up yet, will get to you asap.)
Kobo: https://www.kobobooks.com/ebook/hero-for-hire-7/book-cJLwOwPvukG3zTAuQL8KjA/page1.html
iTunes: https://itunes.apple.com/us/book/hero-for-hire/id677147662?mt=11
About Merissa
I love to read, write, drink
strong coffee and eat dark chocolate–not necessarily in that order and
sometimes all at once. I live in the deep South, with my very own superhero,
and my three minions. Together, we attempt to take over the world.

When not otherwise occupied with
planning world domination, I’m a voracious reader and adore happy endings. I
write what I love to read, so I write romance and stories with romantic
elements to them.
My novella Hero for
Hire, written jointly with the fabulous Margaret Bail is due for
release on October 1, 2013. It’s a Paranormal Romance featuring a campy post
apocalyptic take on the Snow White tale, and is the first in our Tales from
Beyond the End series.

Thanks for visiting my Author
website.
I love feedback and messages, so please feel free to
contact me at www.facebook.com/MerissaMcCain,
twitter.com/MerissaMcCain/
http://www.goodreads.com/author/show/7199113.Merissa_McCain,
http://triberr.com/MerissaMcCain
or via email at merissa.mccain@gmail.com
About Margaret
Hi. I’m Margaret Madigan. Or M.K.D. Bail, depending on
what literary genre we’re talking about!
I live in the vast Northern Plains where it’s quiet
and mostly empty, and very conducive to letting my imagination run wild. As a
result, I have difficulty focusing on just one genre of storytelling. Of
course, I love romance, so I write a lot of that, but I also write science
fiction, and dabble in other genres just for the fun of it.
When I’m not writing you’ll find me in a college
classroom teaching English, or working as a literary agent for an amazing
agency…and of course enjoying time with my family.
Like Merissa, I’d love to hear from you, so feel free
to contact me with comments, requests, feedback, or messages at
Twitter.com/mmadiganauthor/
http://www.goodreads.com/author/show/7242698.Margaret_Madigan
https://www.facebook.com/mmadiganauthor