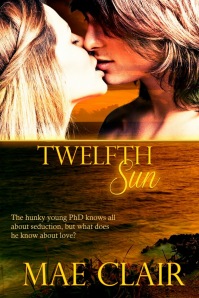 Nautical Superstitions and
Twelfth Sun by Mae Clair
Whether
it’s ghost ships, sea lore, or whispered tales of phantom winds and water sprites,
I’ve always been intrigued by the murky depths of the sea. From ancient times
to present, the underwater world has harbored creatures serene and foul.
But
what of the brave men and women who attempt to tame the sea or exist within its
dominion? Even today, sailors are a superstitious lot, many of their beliefs
retained from an age when water haunts and sea serpents were recognized and feared.
While
writing TWELFTH SUN, a novel which centers around the treasure hunt fora maritime
artifact, I had the occasion to sort through a host of nautical superstitions. Here
are some of my favorites:
1.
Untying knots in a rope bring favorable winds.
2.
Knitting hair into the toe of a sailor’s sock will bring him back to
you.
3.
If a sailor dreams of a horse, it is an omen of high seas.
4.
Disaster will follow if you step onboard a vessel with your left foot
first.
5.
A ship’s bell will always ring when it is wrecked.
6.
If St. Elmo’s Fire appears around a sailor’s head, he will die within a
day.
7.
Never rename a ship, for it is bad luck.
8.
A ship’s name ending in “a” is unlucky.
9.
The feather of a wren will protect a sailor from death by shipwreck.
10.  Death comes with an ebb
tide and birth with a rising tide.
11.  Gulls harbor the souls of
sailors lost at sea.
12.  Nail a shark’s tail to the
bow of a ship and it will ward off other sharks.
13.  Black traveling bags are
bad luck for a seaman.
14.  A silver coin placed under
the masthead ensures a successful voyage. Pouring wine on the deck also brings
good luck.
If
you enjoyed these, I invite you to read my romantic mystery, Twelfth Sun, involving an older woman
and younger man caught up in a scavenger hunt staged by a reclusive billionaire
at a lavish seaside mansion:
BLURB:
Reagan
Cassidy is settled in her life. She has a thriving interior design firm, an
upscale condo, two cats, and a goldfish. As a favor to her uncle, she agrees to
team up with his marine archeologist friend to validate and retrieve a
nineteenth-century journal, reputedly that of a passenger aboard the doomed
schooner Twelfth Sun. Finding a hunky twenty-five-year-old coming out of
the shower in her hotel room wasn’t part of the deal, but it’s hard to
complain…
Dr.
Elijah Cross is cocky and he knows it. He enjoys trading barbs with the lovely
Reagan. Barbs, and some innuendo. He can tell she’d rather get back home to her
business than stick around for the extended treasure hunt they’ve been talked
into, but he’s fine with the situation. At least, until the “clues” start
getting personal.
Reagan
finds Dr. Gorgeous is as skilled in matters of the heart as he is behind the
lectern. Throw in a series of clues which mean more to Elijah than he’ll
explain, several odd-ball competitors out to win the journal, a saboteur, and a
lavish seaside mansion, and Reagan has enough trouble keeping her head
straight, let alone her heart.

WARNING: Younger man, older woman, nautical riddles and romance.
SHORT EXCERPT:
“My
dad’s father was part gypsy. Besides, the sea is in my blood.” Elijah turned
onto his side, locking his good leg over hers, holding her in place. Pushing up
on one elbow, he stared down at her, abruptly serious. “Did you know a good
marine archaeologist could spend his entire life studying a single wreck and never
be bored? Never feel the need to move onto something else?” He stroked her
cheek, brushing her hair aside. “That’s what I want to do with you, Reagan. I
want to spend my days and nights learning about you. Everything about you. What
you think. The way you smell…” He leaned forward, inhaling the light scent of
the honeysuckle oil she’d used in her bath.
Ping! Warning claxons flared in
her head. Elijah, playful and teasing she could control. Elijah, serious and
romantic meant trouble.
“The
way you feel.” His fingers tracked down her arm and hooked into the flimsy belt
holding her robe shut. “The way you taste.” His mouth closed over hers at
precisely the moment he tugged open her robe.
Purchase TWELFTH SUN at:
Amazon
Barnes and Noble
Kobo
iBooks
AUTHOR BIO:

Mae Clair
opened a Pandora’s Box of characters when she was a child and never looked
back.  Her father, anartist who tinkered
with writing, encouraged her to create make-believe worlds by spinning tales of
far-off places on summer nights beneath the stars. She snagged the tail of a
comet, hitched a ride, and discovered her writer’s Muse on the journey.
Mae loves creating
character-driven fiction in settings that vary from contemporary to mythical.
Wherever her pen takes her, she flavors her stories with conflict, romance and
elements of mystery. Married to her high school sweetheart, she lives in
Pennsylvania and is passionate about writing, old photographs, a good Maine
lobster tail and cats.
Mae is also the
author of the time travel / paranormal novel, Weathering
Rock. Discover more
about Mae on her website and blog at www.MaeClair.com