A trip to Halloweens past with Siobhan Muihr

My husband and I love to dress up for Halloween and we’ve been doing it for as long as we’ve been a couple. I think the first year he asked me out he went as “Dr. Death” – the comparative research side of paleontology with blood and feathers stuck to his lab coat, lol.
This year, I’m dressing as my heroine from The Beltane Witch, in her Beltane finery (Outfit3 pic) as I help my kids visit the neighbors. But last year Mr. SM and I dressed up as a Cowboy and his mail-order southern belle bride (Cowboy Belle pic). The year before, we dressed up as a old Hollywood Starlet who bought a ranch here in Nevada outside Las Vegas and her cowboy lover (Cowboy and Starlet pic). The ranch still stands today and is a protected landmark even though the Starlet is gone. Sometimes we’re not as coordinated. In 2010 we dressed up as Neo from Matrix and a Green Mime (Neo and Mime pic), but in 2009 we dressed up as vampires (Halloween 2009 pic), although the fangs didn’t stick to our teeth as planned. Halloween in 2008 was our very first costume together and like most women I can’t resist a long haired Highlander (Halloween 2008 pic).
So what are you dressing up as this year? Do you celebrate Halloween that way? Thanks so much for stopping by and happy reading!
Siobhan
MY
LINKS
Website: http://siobhanmuir.com
Blog: http://siobhanmuir.blogspot.com
Facebook: http://facebook.com/siobhan.muir.35
Twitter: http://twitter.com/SiobhanMuir
Goodreads: http://www.goodreads.com/author/show/5760938.Siobhan_Muir
Google Plus: http://plus.google.com/u/0/118081545120488658410/posts
BUY LINKS
Smashwords:
https://www.smashwords.com/books/view/329349
http://ow.ly/mZQ0e
All
Romance Ebooks: https://www.allromanceebooks.com/product-thebeltanewitch-1225059-340.html
Amazon:
http://www.amazon.com/Beltane-Witch-Cloudburst-Colorado-ebook/dp/B00DL4INB0/ref=sr_1_1  http://ow.ly/mZPWH
Barnes&Noble:
http://www.barnesandnoble.com/w/the-beltane-witch-siobhan-muir/1116057806
Kobo: http://store.kobobooks.com/en-US/ebook/the-beltane-witch 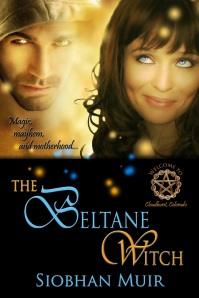 BLURB
Magic, mayhem, and motherhood… a witch’s work is never done,
but Sabrina draws the line at the Fae.
After
almost two decades as a practicing witch in Cloudburst, Colorado, Sabrina
Foxglove is done with men, magic, and the fertility rituals of High Beltane.
She’s dealt with all three before and ended up with a young daughter and no
partner. Twice. She’s looking forward to a magic-free May Day, with nothing more exciting than
making brownies for a kindergarten class and decorating a May Pole. She
definitely doesn’t have time for a handsome, Fae-touched man.

After almost two centuries as the human
chamberlain to the Fae’s Summer Court, Darius Winterbourne is a man accustomed
to getting his way. So when the
Summer Queen tasks him with finding a witch to perform the annual rituals and
strengthen the ancient warding magicks, he figures it should be easy. He
doesn’t expect Sabrina’s hardheaded refusal, her untrained abilities, or his
attraction to her. With less than a week to Beltane, he must gain Sabrina’s
trust before he loses his home, his position…and his heart.

BIO:
Siobhan Muir lives in Las Vegas, Nevada, with her husband, two daughters, and a
vegetarian cat she swears is a shape-shifter, though he’s never shifted when
she can see him. When not writing, she can be found looking down a microscope
at fossil fox teeth, pursuing her other love, paleontology. An avid reader of
science fiction/fantasy, her husband gave her a paranormal romance for
Christmas one year, and she was hooked for good.
In previous lives, Siobhan has been an actor at the Colorado
Renaissance Festival, a field geologist in the Aleutian Islands, and restored
inter-planetary imagery at the USGS. She’s hiked to the top of Mount St. Helens
and to the bottom of Meteor Crater.
Siobhan writes kick-ass adventure with hot sex for men and women
to enjoy. She believes in happily ever after, redemption, and communication,
all of which you will find in her paranormal romance stories.
Siobhan’s recent release, The
Beltane Witch, is the second book in the Cloudburst Colorado series, and
she has also published Not a Dragon’s
Standard Virgin and Queen Bitch of
the Callowwood Pack through Siren Publishing, and Her Devoted Vampire through Evernight Publishing. Her free read
entitled A Hell Hound’s Fire
introduces her Cloudburst, Colorado series. 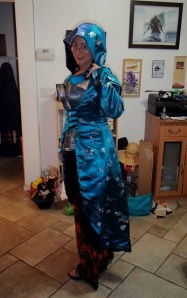