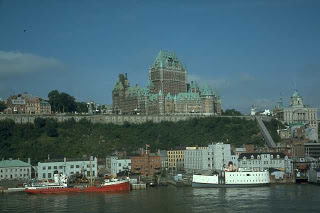 Romantic
Quebec
by
Linda McLaughlin
The
old city sits regally atop the bluff like an aristocratic dowager, proud of
each gray hair and wrinkle. Ancient yet ageless.
Quebec.
Though
it was many years ago, I still remember my first glimpse of Quebec. My husband
and I arrived by train in late May. The trip was part business as I was writing
Rogue’s Hostage, a historical romance that took place during the 1759
siege of Quebec, and I wanted to see firsthand the place where my characters
would live, love and nearly die. And it was part pleasure, the first real
vacation my hard-working husband had been able to take for sometime. A chance
for us to be together without the demands of work and home.
The
city gave us a cold welcome. Rain drizzled from the sky, a frigid wind blew off
the St. Lawrence, and the temperature plummeted.  Wrapped in three layers of clothing, Bob and
I opted for a bus tour the first day, hoping for better weather to come.
Our
wish was granted the next day as the rain stopped and the sky turned light
turquoise blue dappled by fluffy white clouds. We still needed three layers of
clothing, but I got my chance to meander down the narrow, cobblestone streets
of this UN designated World Heritage Treasure. For a panoramic view, we climbed
up to the city walls that existed when the city fell to the British army in
1759. The shelling destroyed much of the city, but like the proverbial phoenix,
Quebec rose from the ashes and rubble, more magnificent than ever.
I
wanted to sample the kind of food my characters might have eaten, so I dragged
my husband to a restaurant located in an old house in Upper Town that
specialized in authentic French Canadian cooking. There we dined in a room
displaying antique weapons. I ordered tourtiere, a meat pie, and tarte
au sucre, maple-syrup pie. Bob insisted on sharing his ham and buckwheat
pancakes with me. We spent the afternoon walking off our lunch. It was evident
the early French Canadians had never heard of nouvelle cuisine!
As
I strolled the streets of this charming city, my writer’s eye tried to picture
an older Quebec, filled not with tourists in modern dress, but women in long
skirts and men in knee breeches, carrying muskets. I picked the spot where my
characters would live and work and fight. As I took dozens of photographs and
tried to commit as much as possible to memory, I knew my heroine would fall in
love with Quebec, as I had. And I knew she would leave, as I must. But neither
of us would ever forget her.
What
is your favorite romantic vacation spot? 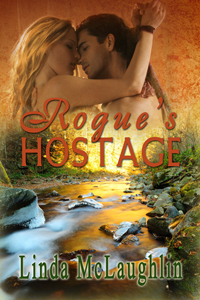 Rogue’s
Hostage
By
Linda McLaughlin
Historical
Romance
4 ½ stars and a Top Pick from Romantic Times!
Romantic
Times Nominee—Best Small Press Romance of 2003!
2nd
Place – Lorie Awards – Best Historical Romance!
His hostage…
In 1758 the Pennsylvania frontier is wild, primitive and
dangerous, where safety often lies at the end of a gun. Mara Dupré’s life
crumbles when a French and Indian war party attacks her cabin, kills her
husband, and takes her captive. Marching through the wilderness strengthens her
resolve to flee, but she doesn’t count on her captor teaching her the meaning
of courage and the tempting call of desire.
Her destiny…
French lieutenant Jacques Corbeau’s desire for his captive
threatens what little honor he has left.
But when Mara desperately offers herself to him in exchange for her
freedom, he finds the strength to refuse and reclaims his lost self-respect. As
the shadows of his past catch up to him, Jacques realizes that Mara, despite
the odds, is the one true key to reclaiming his soul and banishing his past
misdeeds forever.
(Previously
published by Amber Quill Press)
Rogue’s
Hostage is now available as an electronic download. For more information,
go to http://www.lindamclaughlin.com/rogueshostage.html
This
is the first stop of my Rogue’s
Hostage Blog Tour. Leave a comment here with your email address to be
entered for a $10.00 gift certificate of the winner’s choice: Amazon, Barnes
and Noble, iTunes, etc. The giveaway ends on March 3.
My
thanks to Brynna for hosting me today. Hope you are enjoying the Valentine’s
Event.
Linda

Linda McLaughlin grew up with a love of history fostered by
her paternal grandmother and an incurable case of wanderlust inherited from her
father. She has traveled extensively within the United States and has visited
Mexico, Canada, & Australia. A lifelong dream came true with a trip to
England where she was able to combine sightseeing and theater with research for
her novels. A native of Pittsburgh, she now lives in Southern California with
her husband.
Her first book was Worth The Risk by Lyn O’Farrell.
Now Linda writes historical and Regency romance. She loves transporting her
readers into the past where her characters learn that, in the journey of life,
love is the sweetest reward.
She also writes sexy to erotic romance under the name Lyndi
Lamont.
Website:
http://www.lindamclaughlin.com/
Blog:
http://flightsafancy.blogspot.com/
Twitter:
https://twitter.com/LyndiLamont