Win a copy of LORE OF FEI by Kathleen S. Allen 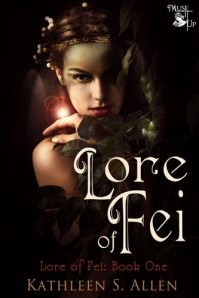 ENTER THE GIVEAWAY HERE or use the link below
https://docs.google.com/spreadsheet/viewform?formkey=dHVJcFdkVUJSYm43YlY2ZDB0X1JCQ0E6MA

LORE OF FEI BLURB:
“I am not a human
girl, Duri. I am a faerie, like you. I was born without wings.” His eyes
widened, but he still did not speak. “The Old Ones sent me to find a way to
stop the humans. There can be no war on Fei. I need to know what the humans
plan and when they will raid Fei again. You can help save Fei from extinction,
Duri. Will you help me and be loyal to me and to Fei?”
He nodded. It was
a slight nod, but it was a nod.
“Thank you Duri.”
I sensed relief from him. “Sunvi, of the Old Ones has been captured and is
ensconced in the food area. His wings have been clipped, too. He will help us
restore Fei to the land it once was.”
I moved away from
Duri toward the dragons. Tashie spotted me and flew over. She gave me a look,
and I laughed at her. I sensed hunger from her. I reached in my pouch and
pulled a sweet out. She took it and gobbled it down. I scratched under her
chin, feeling the happiness flowing from her into me. I looked over to where
Duri had stood, but he had gone back to the Lair. I hoped I could trust him.
Faeries were much harder to read than humans.
LORE OF FEI-a Young Adult faerie fantasy. Released April 27,
2012 by Muse It Up Publishing. Book Two of the series, WAR OF FEI to be
released Feb. 2013.
Watch the book trailer here: http://youtu.be/V1GF3KP6gGI
Buy on Kindle here: http://www.amazon.com/Lore-of-Fei-ebook/dp/B0080IP310/ref=sr_1_1?s=digital-text&ie=UTF8&qid=1339955933&sr=1-1&keywords=lore+of+fei