*Please welcome guest author Kristina Knight. Thanks for visiting, Kristina, and congrats on the new release! 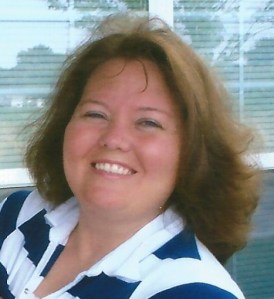 Have you ever used contemporary events or stories “ripped from the headlines” in your work? — I’ve written two romantic suspense novels, both of which are languishing on my harddrive in need of a serious edit, and both were ‘ripped from the headlines’ books at the time I wrote them. But “What a Texas Girl Wants”, my debut contemporary romance, is actually ripped from the radio! I was flipping through stations one day and Toby Keith’s “Stays in Mexico” was on. Kathleen and Jackson immediately came to me and demanded I tell their story – because, for them, what happened in Mexico followed them right back to Texas!
Is there anything you find particularly challenging about writing? — Not neglecting my family when the characters are really talking to me is a huge challenge. I have a husband and a daughter (just turned 4!) and friends and when my stories really get rolling I tend to get tunnel vision. Shutting the writing down is hard at those moments, but my life is a much happier place when I keep everything balanced!
How did you deal with rejection letters? — I’ve been really lucky in that 95% of the rejection letters I’ve gotten have been personal with actual advice in them for my books. Constructive criticism, I think, is much easier to deal with because it gives you direction rather than just ‘no’. Now, it’s still not a great feeling, but it is easier to deal with.
Who is your favorite author and why? What books have most influenced your life? – My favorite author is Jayne Ann Krentz (AKA Amanda Quick AKA Jayne Castle). I admire how she’s reinvented herself, how she’s never given up on her books..and I envy her ability to tell a kick-ass story filled with angst, emotion and hair-raising twists and turns. I can’t choose just one book that has influenced me (because then all the other books might revolt and come after me), but I’ve learned a LOT from several different auto-biographies. First and foremost, that we must believe in ourselves and our abilities first…and second that we can’t give up. Can’t, can’t, can’t. 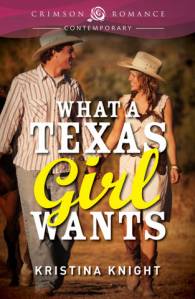 What’s the weirdest thing you’ve ever done in the name of research? — Gone to a gun range? I’m not sure that’s ‘weird’. I write contemporary romance, mainly, so most of my research is into exotic places or professions. I spend a lot of time online looking things up or asking friends really invasive questions about their jobs…
Buy Links: http://www.amazon.com/What-Texas-Girl-Wants-ebook/dp/B008195BIS/ref=sr_1_1?s=digital-text&ie=UTF8&qid=1336496939&sr=1-1
Blurb/Bio: Kathleen Witte is a down-to-earth girl. She has to be, with the family ranch on the verge of success. After seven months of keeping it all together by swearing off men, however, Kathleen needs a bit of fun in the sun. Waking up with a husband she can’t remember isn’t how she planned to blow off steam.
The last thing Jackson Taylor wants in his life is a down-to-earth girl. He has four weeks of freedom in which to find his birth mother. He’s done well avoiding commitment until now, so when he wakes up on a Mexican beach with Kathleen his first reaction is curiosity. When he spies the matching wedding rings on their left hands curiosity turns to concern.
Neither Jackson nor Kathleen want to stay married, but when her family shows up, they have no choice. Once back in Texas, however, can they keep this all-business marriage from turning into an all-consuming love?
Once upon a time, Kristina Knight spent her days running from car crash to fire to meetings with local police—no, she wasn’t a troublemaker, she was a journalist. When the opportunity to focus a bit of energy on the stories in her head, she jumped at it. And she’s never looked back. Now she writes magazine articles by day and romance novels with spice by night. She lives on Lake Erie with her husband, three-year-old daughter, and twenty-year-old fur-kid. Happily ever after.