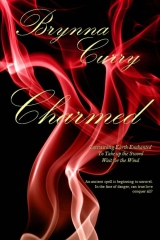 Tuesday, April 10th I have the pleasure of joining authors Edie Hand, Edward Herring, Sylvia Lakeman, and Rickey “Butch” Walker for a book signing event. I will be signing copies of Charmed. Hope to see you there. Can’t make it? That’s okay. Autographed copies of Charmed can be ordered directly through me by using the contact page or by sending an email with the subject BOOK ORDER to brynna@brynnacurry.com

Alabama has a great many writers and Winston and it’s surrounding counties make a contribution to the list. The Haleyville Public Library will host to five authors. The public will have the opportunity to purchase books, speak to the authors and have their items autographed. Visitors will have the opportunity to hear each of the authors speak in a personal, intimate setting at individual scheduled times. Seating is limited so visitors are encouraged to arrive early and enjoy a fun, educational and exciting evening with these writers. For more information call (205) 486-7450

Here is the schedule of authors and times:

3:45 Brynna Curry, Haleyville, AL – The author of more than seven Contemporary Romance eBook novels. Her best-selling series Elemental Magic has received rave reviews and her soon to be released Shadows of Seven series is sure to do the same. A complete list of her books can be found at www.brynacurry.com. This is her first public appearance and book signing.

4:10 Sylvia Lakeman, Haleyville, AL – “Jack: “Plane” Life in a Small Town”, tells the story of “Jack”, Mrs. Lakeman’s late husband, and his life as a pilot in a small Northwest Alabama town. The story begins in the 1930’s and spans the years to tell of his love for airplanes and his experiences with many different planes, including an aerobatic bi-plane. It includes many affectionate glimpses of many folks in the small town. (pop. Under 5,000). You will love this book and it will leave you wanting to share it with your friends.

5:00 Edward Herring, Mt. Hope, AL – He is a Postmaster, War Between the States Reenactor, Charter member of the Phil Campbell and Moulton Civitan Clubs , and a avid Historian. As an author, his works include, “Sam Baker: Winston County’s Gunfighter” and “Malice, Murder and Mayhem in the Indian Territory.” He’s also had numerous articles appear in True West, Wild West, Old West Journal, Oklahoma State Trooper Magazine, The Bankhead Monitor and The Source magazines.

5:25 Edie Hand, Sumiton, AL – She’s a businesswoman, speaker, television celebrity, and author. She has authored, co-authored, or assisted in the development of over twenty books. Her personal books include inspirational cookbooks and novellas from the heart. In addition, the business world knows Edie for her many acts of kindness and work in various charities.

Edie has starred in national commercials, daytime television soaps, and hosted numerous radio and television shows nationwide. One of her most recent endeavors is as Co-host of “Rx for Healthy Lifestyles” which is a new show on RFD’s Rural TV Network.