Admin note – We have a special guest today. Welcome author Veronica Scott as she celebrates her debut release Priestess of the Nile.

People often ask me why I wanted to write a paranormal romance set in Ancient Egypt. I’ve always loved the idea of ancient civilizations, going on for thousands of years, and yet  in some cases all we know of them now is captured in a few  shards of pottery, a broken statue, a mention in someone else’s legends. When it comes to Egypt, we have a lot more knowledge, thanks to their strong belief in the afterlife, which led them to store up worldly goods in their tombs and paint scenes of daily life on the walls, then seal it all up and walk away. 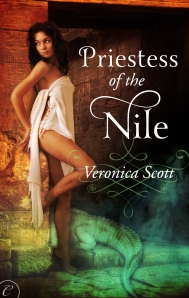 The Egyptian mythology is particularly rich in gods and goddesses with fascinating, complex tales and attributes. My Work In Progress is a connected series set in 1500 BC, in the paranormal genre rather than strictly historical. I wanted the gods and goddesses to come to life in my stories and play a role, the way the Egyptians always believed was the case. At a key plot point my pharaoh needed protection from black magic. Turns out a more obscure god, Sobek the Crocodile, had among his many duties and abilities, the charter to protect pharaoh from just that very problem! I wrote Sobek into one scene and moved on.
He lingered in my mind though. There are a lot of conflicting legends around him, including whether he was a force for chaos or a force for good. And most intriguingly for a romance writer, he was linked with at least four different goddesses.  The Egyptians never depicted him as fully human – always showing him as either a full crocodile or half man, half crocodile. From our vantage point 3000 years later, we know that means he’s a shifter, right? Who therefore, could walk the banks of the Nile in the form of a man! And fall in love with the right woman…this is how a romance writer’s brain works, or at least mine goes on this way, worrying at a challenge until I find a solution and a plot.
Of course he’d fall in love with a beautiful girl he meets one day, who tries to keep one of his abandoned temples in order, who sings all the traditional songs in an amazing voice – Merys, the heroine of Priestess of the Nile. Through his time spent with her, Sobek would come to understand the simple joys of human life and love. But of course there are rules about romance between the gods and humans and Isis, queen of the Egyptian gods, takes exception to his distraction from his duties to the Nile. I wrote the basic novella in one weekend, just not even taking time to do anything else. It was one of those that demanded to be told, you know?
Of course the manuscript needed a lot of polishing, layering of emotions, amplification of secondary characters…but at that time Carina Press had a call out for Egyptian romances, so when I thought the story was ready, I hit the send key.
And a few months later, got the wonderful middle of the afternoon phone call from Angela James, Executive Editor at Carina, to tell me they wanted to publish the Crocodile God’s story. So now it’s my debut novella, Priestess of the Nile and I’m still excited!
Veronica Scott grew up in a house with a library full of books as its heart, and when she ran out of things to read, she started writing her own stories. Married young to her high school sweetheart then widowed, Veronica has two grown daughters, a 9 year old grandson and cats. She can often be found on twitter at @vscotttheauthor